After being held up through security at London airport, missing our connecting flight and having a 5 hour wait for another flight into Paris, we landed in the country Ihaia and I will be spending the next few years. This is my first time in France and both of our first time in Paris. We have four nights in Paris and the best bit – we get to spend it with mum, Gracie and Josh (excitement level 1000)!! Mum and Josh have been to Paris before so they had an idea of what to do for the next couple of days. Ihaia and I stayed our first night at an airport hotel as we landed at 10pm and the next day caught an Uber into the city and met my family at the Air BnB. We stayed (here) in a two bedroom apartment in a 16th century building in the suburb of Marais that was walking distance to shopping, food and landmarks such as the Notre-Dame. Before I start this blog, let me be clear that I had no idea what to expect from Paris, no real interest in “architecture” or “art” and wow, how that changed in a day.

I’m so excited to be in Paris! The place with so much history, the place I’ve only seen in movies, pictures and social media, the place with so many famous landmarks. We checked into the AirBnB at 2pm, caught up with my family who have been travelling Italy for 4 weeks (lots of pics here) and planned out the rest of our day. We went for a walk around the area the apartment was in and got a bite to eat from a nearby bakery where I got my first taste of the pastries of Paris *heart eyes* then got ready for the night and headed to the Louvre (where the Mona Lisa lives). We just went for a photo op with the impressive glass architecture as we were on our way to dinner and hungry!! However everything around the Lourve was beautiful and we spent a good amount of time taking everything in. We went to a nearby restaurant called Abattoir for dinner as mum and Josh have been there before and it was delicious, I would pass on the high recommendations! The meat, veggies and dessert that claims they have the best creme brûlée in Paris was so good (see picture below for Gracies thoughts on it, lol). After dinner we headed to Tuileries Garden which is surprisingly quiet and peaceful being in the middle of the city. Its a beautiful public garden with lots of sculptures and a water feature and often used as a venue by a designer for Paris Fashion Week. There is also an amusement park close with a ferris wheel that I’d imagine gives you an amazing view of the city and the landmarks near by which includes Champs-Elysées Avenue, the Louvre, Arc de Triomphe and the Eiffel Tower. I’m not great with heights but from the small amount of Paris that I have seen, it looks like I need to get over it to take in the views! As the sun set while we were in the gardens, we headed back to the apartment for the night. I’m so happy here with my favourite people!

Ihaia and I are massively jet lagged and our sleeping is all over the show! After waking up at 430am, we head out at 730am and get everyone breakfast from the bakery which is fast becoming our favourite. Breakfast is not a “thing” here like it is at home, it mostly consists of coffee, hot choc or juice with a pastry and in the bakeries there is mostly fresh orange juice on tap. We have a super chilled day of wandering the streets and let me tell you that there is so much beauty in Paris, all the buildings, windows, doors, flowers, cafe set ups on the sidewalk and then the stunning massive churches or landmarks on most corners. We watched the All Blacks game at a pub in the city then in the afternoon we packed a picnic and set off to the Eiffel tower. There are massive lines to get into the grounds and up the top of the Eiffel tower so we found a park close by and set up there. There are lots of people selling wine, beer and Eiffel Tower trinkets and you will get asked every few seconds, all part of it I guess! We brought a bottle of Rosé and watched the sunset. Once it got dark we packed up and headed for a look at the food trucks that were close. We brought a crêpe and headed further back from the Eiffel Tower to watch the light show which was magical! Definitely a highlight of the trip.

Picnic under the Eiffel Tower 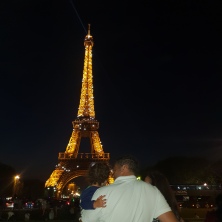 Night lights with my family

We head to Jardin du Luxembourg, which is a big 23 hectares of lawn, gravel, statues, trees, flower beds, water fountains, parks and ice cream stalls. Everything is well maintained and beautiful and we were there on a stunning day. Lots of people were having picnics on the grass, there is also a pond where kids can float boats (like on Stuart Little) and a couple of kids parks that Gracie played at too. After ending Luxembourg with an ice cream, Ihaia and I headed to Champs-Élysées which is almost 2km of a “luxury” shopping street and is also the finish line of the Tour de France cycle race. I brought my first french macarons from a shop there and they were delicious! At the end of the street we hit the Arc de Triomphe. We didn’t head to the top but admired it from across the road and took up the photo opportunities! While we were there, police were fining Ubers who were dropping people off right across from it so maybe a small tip is to get dropped at a street near. We headed back to the apartment and got ready for our last night with everyone. We got a cheap dinner and then walked to admire the outside of the Notre-Dame which was breathtaking. The details that went into the architecture in Paris is truly amazing! It was also cool to see as I’m a fan of Disney’s “The Hunchback of Notre Dame”. There were street performers around and the river is near which lots of boat tours cruise down. As the sun set on our last night in Paris, we have no doubt that we’ll be back for more exploring. I’ve saved some photos and videos from Paris on my Instagram highlights.

Finishing Luxembourg with an ice cream

It was so dreamy spending time with my family in Paris, how lucky is that! Gracie is only 2 and she was such a good little traveller. Like us, she always had plenty to look at and explore and there was always an ice cream available close by! I loved being able to experience Paris with my family and thank mum, Josh and Grace for the special memories that were made. Saying goodbye was insanely hard and nothing like I’d prepared for. Thats another blog post in itself but I won’t be able to start that until I’m in the right mind space to think about it all over again.

Ihaia and I are only a 3 hour train ride away from Paris so we’ll be back to go to the top of the Eiffel tower, to get on a ferris wheel and see what else we can discover in this amazing city. Believe me when I say this city is full of magic and we’ve only just started…