After a 2hour 17min direct train ride from La Rochelle to Bordeaux, I arrived in a beautiful sunny town that I’d never been too, ready to explore. I caught an Uber straight to the hotel to check in and drop my bags and wow – I’ve been told the hotel standard in France is a lot less cared for than home but I wasn’t expecting it to be this bad! My room was so rundown, the bed was uncomfortable and creaky, the list goes on… I was looking forward to a bit of luxury staying in a hotel by myself, a big comfy bed, the mini bar, maybe some room service and a movie. ANYWAY – after that putting a real damper on the start of my weekend, I set out in the direction of lunch. I had done some asking around and investigating on the internet on where to eat this weekend and walked to a cafe called Horace. I ordered a homemade lemonade, cheese and ham on homemade bread that came with a side salad and a slice of their homemade carrot cake for dessert and I can confirm, it was all delicious. With a full tummy, I set out wandering the streets aimlessly, taking in the atmosphere, staring at all the pretty buildings and having a look around the shops. The buildings in Bordeaux are so beautiful and old, there is so much history in the city. After a couple of hours I headed to La Comtesse for a drink which is a cute little bar down a side street in the city with lots of pink flamingos in the entrance (that was the selling point for me!). Feet sore and eyes tired, I headed back to the hotel *meh* for the night. I grabbed a foot mask from Sephora on the way back after walking all afternoon in Birkenstocks and it worked a treeeeat! I’d highly recommend for travellers/backapackers etc to stock up on foot masks to do after a long day of walking because your feet feel like clouds afterwards!

I was woken up early by some loud noises in the hotel (the list of complaints go on…) so decided to get up and head out asap. My first stop was Monument aux Girondins, built in 1902 and standing at 54m high, this fountain sculpture is impressive. I got there around 8am and the morning light was hitting the top of it which had me buzzing (if you know me, you’ll know!). Being solo for the first half of the weekend, I chucked my camera up on a fence on self timer and took some photos because why not take up the chance with great lighting and no people around?!? Lol. I then walked to the Miroir d’Eau which is the worlds largest reflecting pool, 3450 square metres big. The pool itself is 12 years old but it’s across from monuments that are 3 centuries old. However when I got there, there was no water on the slabs! They should really put some times on the internet in my opinion! So I kept walking along the waterfront to a bridge and took some more photos on the bridge. Heading back in the city, I came across the Bordeaux Cathedral which was stunning, ya best believe I set up another self timed pic :). The place I’d planned to go for breakfast doesn’t open until 10.30am – let me be clear that I really disagree with opening times over here (!!) so I sat on the stairs of the Grand Theatre and people watched to kill some time. I then headed to Contrast for breakfast and it was deeelish, will definitely be going back there when I’m next in Bordeaux. I did a bit of shopping then headed back to the hotel to have a nap and then got ready to head to Ihaia’s rugby game. The game was played at Matmut Atlantique which is a nice big stadium and the “after-game-party” went off afterwards. People stay at the stadium for ages after the game to eat, drink and hang out, so different to back home! Ihaia is staying with me tonight, yaaay, and we’re training back to La Rochelle together tomorrow afternoon. BUT – since I didn’t get to see Miroir d’Eau in all its glory in the morning, I talked Ihaia into going to see it at night and boy it did not disappoint, it was so beautiful!

After checking out and good riddance see ya never to the hotel, we headed back to Horace for breakfast. On Sunday’s they serve one meal only (whyyyyyy is there always a catch with eating out) luckily we both liked the sound of it and I tried to order a milkshake too as you’d be surprised how hard they are to come across, and was told that the barrister who is making all the drinks is too busy so that won’t be an option. Over it. So breakfast was nice anyway, then we hit the streets again, sightseeing and shopping. Honestly just walking around is the best way to explore a place, we turned down random  alleyways, walked along the water, the shops opened at 1pm so Ihaia got to get a bit of shopping in too which he was stoked about. We then caught an Uber to the train station and got our 5pm train back to La Rochelle.

Bordeaux was beautiful and the shopping is great, its super close and easy to get too from where we live so I’m sure the visits will be regular. I loved having time by myself to wander around and to do and see things at my own pace. I’ve got a “travels” highlight on my Instagram where I uploaded plenty of Bordeaux if you want to check out some more pictures.

Looking forward to the next adventure! XO 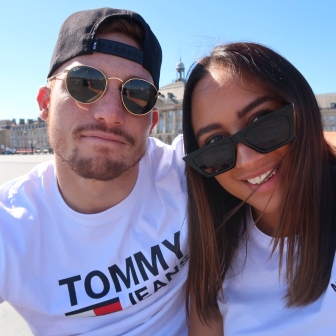