OOOOHK, so. We knew Ibiza was a party island and we’re not huge partiers but it caught our attention, so we went. And this is how it was for us.

We flew Santorini [4am take off] to Barcelona then another flight into Ibiza that landed at 8am. Unfortunately our bags didn’t make it from Barcelona so we went, bagless, to our accomodation. A friend showed me Wi-Ki-Woo hotel and I ended up booking us there for the week. I chose it for its aesthetic, very “Instagram” looking [yes, I fall for these traps] and its location which is San Antonio, quite a happening part of Ibiza and near a lot of beautiful beaches. We were lucky our room was ready when we checked in around 10am and went straight to sleep as we hadn’t had sleep in what seemed like forever! When we woke in the afternoon, our bags still hadn’t arrived at our hotel so we had a late lunch at the hotel restaurant. We ate here a lot during our stay, such delicious food and a menu full of choices. After lunch we went and hired a scooter for the week and by 7pm, our patience for our bags had worn off so we got a 30euro taxi back to the airport for answers. My suitcase had arrived sometime during the day *yay* but unfortunately Ihaias hadn’t. He was such a good husband about it though, saying that I need what’s in my suitcase more than he needs whats in his [correct] and he’s not mad mine had arrived first. What a guy! Taxi’d back to the hotel and had drinks and nibbles at the restaurant for our first night in Ibiza.

Woke up to a sunny warm day and had breakfast at the hotel. We went into San Antonio town to find Ihaia some board shorts for our day scootering around beaches but before that… he got his nose pierced! It was fun for me to watch for once as I’ve previously had my nose pierced twice, lol. He’s wanted it for a few summer trips that we’ve been on so I’m glad he’s finally got it done. Once he’d done that, we were off to our first beach, Cala Bassa. On the way there, we had our first scooter incident that we’ve ever had *face palm*, Ihaia was trying to get ahead of a car that had stopped for people crossing on a pedestrian crossing that he didn’t see and then had to break hard and the scooter kind of bucked us off but because we were breaking it all happened in slow-mo. He went down chest first and me straight after, landing on him like a splat on all fours *wishing I could insert laughing emojis here*. We must’ve looked like such idiot tourists, we got up so fast and moved our scooter off the road where we pulled ourselves back together and carried on LOL. We were lucky it was what it was, neither of us were hurt [only thing was my knee was sore for the next 2 days but that’s nothing in the scheme of things] but I was so quiet the rest of the way to the beach, I wouldn’t have thought then that we’d be laughing our heads off reminiscing about it at dinner that night! We got to Cala Bassa, a big beautiful beach packed with tourists swimming in the clear blue water. We stayed here for a cold drink and a few swims then headed to our next stop, Cala Comte. Another absolutely beautiful beach, clear blue water, a couple of cliff side restaurants, snack shack and bathrooms. We swam and ate ice cream before going to our last beach of the day, Cala Tarida. This was my least favourite as it was a bit windy and I didn’t like the lay out of the beach. All 3 beaches were full of people, all easy to get to by scooter and all had looooots of boobs on show *ahhh, Europe*! Arriving back at the hotel after a long, hot day and getting the news that Ihaias suitcase still hadn’t arrived, we were in another taxi back to the airport [we caught taxis to the airport because its a 30min drive away on motorway, just something we didn’t want to do on the scooter. We also kept going back as we couldn’t get in touch with the people we needed to over the phone]. When we arrived at the airport we were told that Ihaias suitcase is on its way to our hotel that it left not long ago, so we would’ve crossed it on the road. Luckily after all these 30euro taxis, it did turn up that night at the hotel and we both never took our luggage for granted again! We celebrated with a litre jug of Pimms. Amen.

After another breakfast at the hotel, we caught a taxi into the town part of Ibiza where the shops are. One way is mainstream shops like Zara and the other is “old town” where local boutiques are, old town is really cute and colourful and we had a decent walk around both sides, finishing with a drink on the port. At night we headed to the famous “Mambo” and planned to have dinner and watch the sunset but they were all booked out so we ate at the restaurant right next door, which I think is owned by the same people, called Mint. A lot of people also go down to the rocky beach just below and BYO drinks to watch the sunset. It was a great night people watching and once the sun was down, we headed back to the hotel. We would’ve been happy if tonight was our last night in Ibiza, we’ve seen some beaches, we’ve had a day exploring the town and thats probably it for us here. But we do have 3 nights left…

We actually went somewhere for breakfast today! I got my Google on last night and came across a place called “Passion” that had lots of healthy choices on the menu and nice interior. I ordered green eggs [eggs with pesto and cheese] with smashed avo and rocket and an immunity juice. By the time we left, we already decided that we would go back tomorrow. Then we were off to Casa Salada/Casa Saladeta beach. To get from one to the other you climb over a cliff, its easy and takes about 5minutes. We settled at Casa Saladeta for the day after stopping at the top of the cliff for photos over the beautiful crystal clear water. This was my favourite beach of Ibiza. During the day there were a few people walking around selling drinks, food and beach dresses and at one point they all put their stuff away super fast and blended in with all of us chilling on the beach. I asked someone what happened and they said that they got a tip off from someone working with them on the other beach that there were authorities around and they’re not meant to be selling things on the beach. Then after awhile they went back to normal, it was very eye opening! I brought a beach dress off one of the girls selling and now I call it my illegal dress lol. After a few hours swimming and tanning we packed up and headed back to the hotel. The day is finished off with dinner and drinks at the hotel [a litre jug of apple pie cocktail to be exact] and we both also tried shisha for the first time, absolutely wild from us. 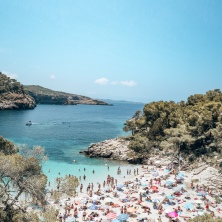 Woke up to our first cloudy day and headed to Passion for breakfast again and I ordered the choc chip avocado pancakes as I was intrigued but did not rate them! Would not recommend. Afterwards we put our washing into the laundromat and Ihaia got a haircut from the local barber that luckily turned out fine! I had a huge nap before we had an early last dinner at the hotel. We also spotted Jack, last years Love Island winner at the hotel and after a little Instagram stalk, confirmed he was staying here too and thats just the icing on the cake because this is SUCH a Love Island themed hotel [down to the love heart floaties in the pool]! As this was our last night, I used it as a “re-charge” night, packed my suitcase as much as I could, did a facemask, cut nails, plucked eyebrows and felt a bit more human for the next destination.

Last day in Ibiza! Showered, packed and checked out. We left our suitcases at the hotel for the day as our flight wasn’t until 9pm. We had scootered past Natural Pau cafe one day and went there for breakfast and had another yummy, healthy breakfast. Natural Pau is an outdoor cafe with wooden swings for seats at the bar too. We dropped the scooter back to the company then headed back to the hotel to spend the rest of the day by the pool. We hired out a day bed, got a few drinks and read, swam and relaxed for awhile. We had an early dinner at the hotel before getting a taxi to the airport ready to fly out…

I’m happy we’ve been there and we can tick that off now. I knew it was a party island but I felt intimated like all the clubs here seem to have different events on each night and everyone seemed to know whats on when. You also seem to have to buy tickets in advance to clubs. Every night seemed to be a new dress code and I honestly couldn’t keep up or figure it out. I thought you could just go to any club any night and dance the night away. It seems not. I say SEEM a lot because I don’t actually know. I didn’t have a Coachella outfit or PLT wardrobe in my suitcase to go out in. I’ve said it once and I’ll say it again, everyones walking around like a damn Pretty Little Thing advert or a scene out of Love Island, that kind of vibe, ya get me? I wouldn’t recommend Ibiza if you want a wholesome Spanish experience.

So many UK people, it almost feels like the NZ/Australia equivalent to Bali. There is a huge diversity of people from young, old, families and pregnant women. Also lots of boobs on the beach and an all round air of freedom and confidence from people, wear what you want, where you want type thing and that was pretty cool.

A perk about getting around on a scooter is that all the parking we came across was free for scooters and cars had to pay a small fee. Scooter tip: always have a towel or something similar to put on the seat as it gets HOT during the day in the sun!

It was cooler than Greece, weather-wise.

I got spoken to in Spanish first pretty much everywhere we went and I’m claiming it. Sí, por supuesto, soy una mujer española. Gracias!

Watch the short Youtube video of our time in Ibiza here.

See the “Euro Summer” highlight on my Instagram for more pictures and videos.